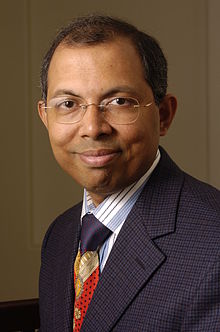 It's my pleasure to introduce my friend and junior, Subir Chowdhury as a distinguished alum of IIT Kharagpur and one of most acknowledged management and quality thinkers of our time.

Subir came to RK Hall in 1985 as a fresher in Aeronautical Engineering. Two years my junior, he had an abundance of energy. Coming from Chittagong in Bangladesh, he had an accent but his eagerness to mix caught my eye. I shared some books, offered him life and some academic lessons and he just soaked it up. I remember him offering to help and volunteering at many events and cheering for the hall. But, what left an indelible mark in my mind was what he did in his second year and my senior year.

In the fall of 1986, at the beginning of the year, my wing-mate, Rahul Bhargava, that year's VP, and a couple of other wing-mates and I were hanging out. In walked Subir with a smile. He asked "Kaku, where is Kharagpur?" We joked as we answered Universe, Solar System, Earth, and then, landed on Bengal. He got excited and we asked "So what?" His answer "IIT Kharagpur, being in Bengal, had English and Hindi magazines but here was no Bengali magazine." We realized he wanted to edit and publish a Bengali magazine and needed Gymkhana's support. That drive and initiative convinced me; Rahul approved Rs. 1,000 and Subir disappeared. We forgot about the episode. On the day of the Mahalaya, in 1986, he came back with a shiny  Bengali magazine "Panchajanya" with an interview with Aparna Sen. He did it as a second year student, from Bangladesh in a matter of three or so months.

Fast forward to 1997. I was at Compaq running the Capital investments group for technology. The CFO showed me a picture of a quality guru, who he was impressed with. That was Subir and as they say, the rest is history.

Ever since then, he has scaled higher heights, brought recognition to our alma mater and established himself as the pre-eminent global guru of quality and has even set up a school for Bangladesh Studies under UC Berkeley. I still get his excited calls; it has been my pleasure to share my advice when needed. But, what I really cherish is his deep bonding with and gratitude to IIT Kharagpur. He wants to give back to his alma mater in a meaningful way, carving out a legacy which IIT Kharagpur would be proud of. I wish Subir the very best and thank you for your relentless pursuit of quality in everything you do.