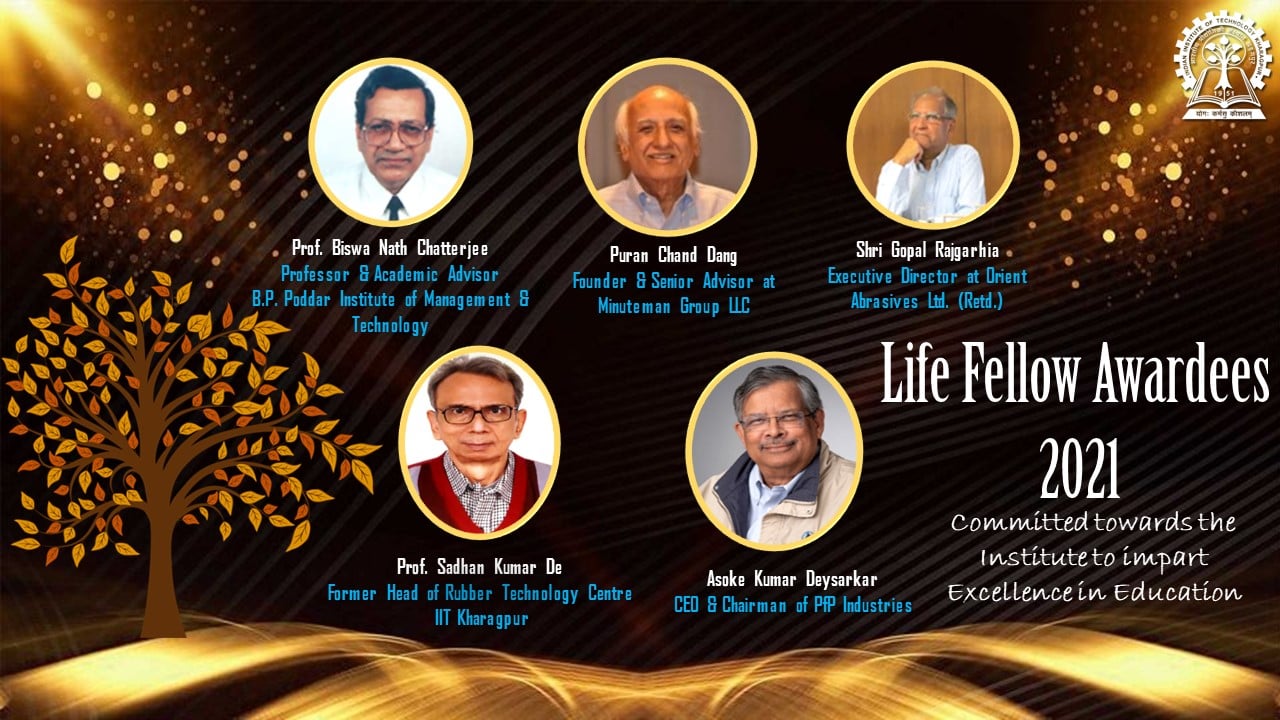 Pride and gratitude runs through the ambience of this Institute with Convocation 2021 just round the corner! IIT KGP is proud to announce five awardees for the Life Fellow Awards of IIT KGP 2021 comprising of Prof. Sadhan Kumar De, Former Head of Rubber Technology Center & Dean of Post-Graduate studies in IIT Kharagpur who joined the Institute in 1967 as Associate Lecturer in Chemistry Department. He was honored with the George Whitby Award for Excellence in Teaching & Research, Rubber Division, American Chemical Society. Prof. Biswa Nath Chatterjee, a former Professor in E&ECE Department, IIT Kharagpur is another awardee who is presently the Professor & Academic Advisor of B.P. Poddar Institute of Management & Technology. He served the Institute under various administrative capabilities as Head of Department, Dean (Academic), etc. & received the prestigious Shri Hari Om Ashram Prerit Dr. Vikram Sarabhai Award in 1983. Puran Chand Dang and Shri Gopal Rajgarhia are the other awardees to receive this honorary. Mr. Dang, named as Lifetime Trustee by IIT Kharagpur Foundation, won the First Distinguished Service Award by his alma mater in 2011 & is the founder of the first IIT Alumni Society of the world (IIT-SINE). Having over 37 years of experience, Mr. Rajgarhia, a chemical engineer is renowned as a successful entrepreneur & an accomplished industrialist. He served as the Managing Director at Orient Refractories Limited & served the position of a Director for many real estate & financial service providers. He was honored with the Distinguished Alumnus Awards in 2019 from IIT Kharagpur. Dr. Asoke Kumar Deysarkar, a PHD in Chemical Engineering is also the recipient of this award. A successful entrepreneur, hailed for his leadership prowess & technical expertise, started his own company, ‘Products for People’ in Houston in 2002 & has successfully built a $1.5 billion conglomerate from scratch in the oil & gas sector. He received the Distinguished Alumnus Awards in 2016 from IIT Kharagpur.
Heartiest Congratulations to all the winners!