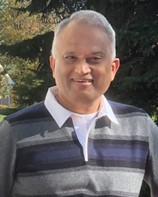 Professor Emeritus Dr. Suresh Nair was Department Head and Cizik Chair in Manufacturing and Technology Management at the School of Business at University of Connecticut (UConn), Storrs, USA, before his retirement in June 2020. UConn is a top 20 public university in the US.

His academic qualifications include Ph.D. and MS from Northwestern University, Evanston, IL; a MS in Industrial Engineering from TIPIE (NPC), Chennai; and BTech from Indian Institute of Technology, Kharagpur in 1979. He is an expert in business analytics and has worked on projects on the interface of operations, finance and marketing in financial services, supply chain management and healthcare. Dr. Nair kept in touch with industry by spending his sabbatical leaves and being a consultant to various companies such as General Electric, Merrill Lynch, JP Morgan Chase, Booz and Company, and others. He also founded FinOpTrix, a software services startup in the bank reserves optimization space, with seed capital from the National Science Foundation (NSF). Dr. Nair has been a visiting faculty at the Indian Institutes of Management (IIM) in Calcutta and Lucknow.

Dr. Nair has held administrative positions both at the college and university levels at UConn. In addition to being department head, he was also Associate Dean for Graduate Programs at the Business School, and the university’s Associate Vice Provost for Institutional Research and Effectiveness. He was trained in Management and Leadership in Education (MLE) at Harvard University. Prior to his academic career, he worked as Assistant Director at National Productivity Council (1981-84) and Siemens (1984-85) in Mumbai before migrating to US.

Presently he resides in Vienna, Virginia (USA), a suburb of Washington DC, and manages Luminaire Fund, his hedge fund. He also enjoys spending time with his grandkids. (Suresh's LinkedIn Profile)